UK house price growth continued to cool in March, according to the latest figures from Nationwide.

In the three months to the end of March, Northern Ireland saw house prices rise from 2 per cent in Q1 2017 to 7.9 per cent.

Wales also saw a pick-up in annual house price growth, from 3.3 to 6.1 per cent.

The West Midlands saw the strongest English growth in the first quarter, with prices up 4.9 per cent annually.

At the end of Q1 London house prices had fallen 1 per cent. 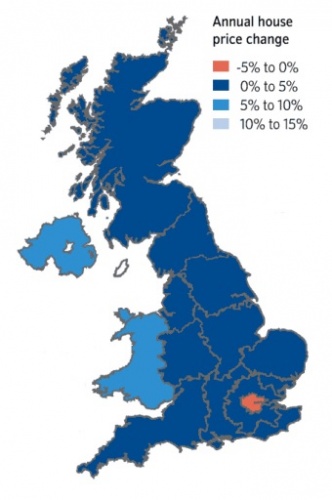 “However, consumer confidence has remained subdued, due to the ongoing
squeeze on household finances as wage growth continues to lag behind increases in the cost of living.

“Looking ahead, much will depend on how broader economic conditions evolve, especially in the labour market, but also with respect to interest rates.”

The figures are seasonally adjusted.